Click "SHOW ALL" ON THE RIGHT HAND SIDE TO VIEW ALL STORIES
Back to News
Military to missionary: Ottawa woman trades gun for Bible 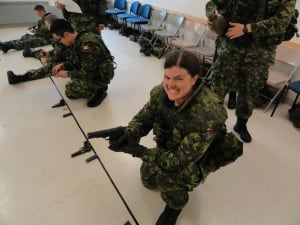 An Ottawa woman is about to undergo a dramatic career change.

Vanessa Banks, 24, is leaving a promising career as an officer in the Canadian Armed Forces to be a Christian missionary in El Salvador.

Banks studied at the Royal Military College of Canada in Kingston, following in the footsteps of her father and two older sisters.

She achieved the rank of second lieutenant and was in training to command tanks and armoured vehicles, stationed in Gagetown, N.B.

But now, she's trading in her gun for a Bible.